Telematics Set to Become an Invaluable Tool During Natural Disasters

The occurrence of natural disasters has steadily increased. In the last two years, North America was hit by more natural disasters than in any year since 1980. Insurance companies battle to deal with the sharp rising catastrophe-related cost of claims, while governments at all levels are working hard to facilitate coordination of emergency response across multiple jurisdictional boundaries.

The trend of economic losses is on the rise since 1970. Insurance firm Swiss Re estimates the economic loss in 2017 to be $306 billion, which is higher than the 10-year-average of $190 billion. In 2017, the US was hit with Hurricanes Harvey, Irma, and Maria that are estimated to have contributed over $93 billion to the annual economic losses from global disasters. 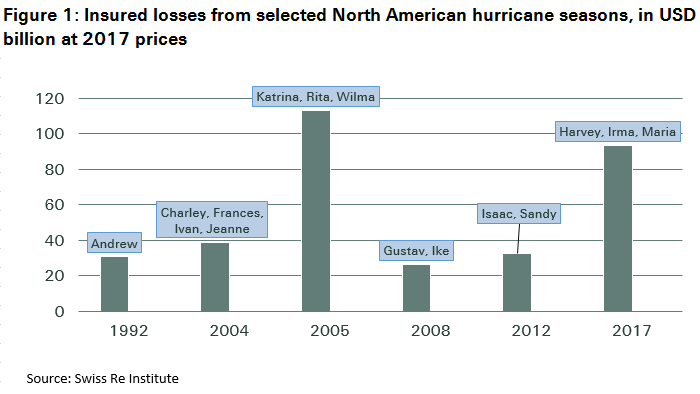 2017 was also the costliest year for insurers. Claims costs to licensed vehicles were estimated between $2.9 to $4.7 billion for Hurricane Harvey alone, which is almost half the amount the Federal Emergency Management Agency (FEMA) budgeted for the 2017 Disaster Relief Fund (DRF). More important than the monetary cost tied to damaged vehicles is the increased cost to human life. For instance, 74% of all mortalities during a flooding event occur in a motor vehicle.

Thanks to the advances in technology, telematics data can provide an abundance of information about large populations of drivers. This data can be used to analyze their collective behaviors and draw meaningful insights. This can be particularly useful for studying the behavior of drivers during a natural disaster. Our team of data scientists used telematics data to study the behavior of drivers impacted by Hurricanes Harvey and Irma to provide valuable data insights.

Did you know that there is a clear change in the pattern of behavior during a hurricane? Our data analysis showed both a decrease in the number of trips taken and the number of drivers on the road during a hurricane. We also saw a reduction in the amount of over-speeding and shifts in the types of vehicles used as well as the road types used. This analysis can enable governments to better allocate disaster relief resources as well as help to implement policies to lower mortality rates and injury in the event of a disaster.

Given these benefits, telematics data can be an extremely useful tool in examining driver behavior and serves as an invaluable tool during crisis situations, such as during a natural disaster. Our detailed analysis of Hurricanes Harvey and Irma confirms many hypotheses about driver behavior during a natural disaster. For example, as expected, we saw a decrease in the number of trips taken during a hurricane.

With our analysis, we are able to provide concrete evidence to support these hypotheses and give estimates of the magnitude of changes in behavior. This can serve to guide future funding and policy decisions. As well, while we provide analysis on an aggregate level, the data can also be used to provide information on a more granular level to see changes in particular neighborhoods. The fact that telematics data are collected in close to real-time can enable such insights to be collected during times of crisis and as a result, allow useful insights about the population to be used by decision makers to provide support.